I Voted Stickers Show Your Involvement

Republican or Democrat, Green Party or Independent, male or female, old or young, there is one thing almost all voters have in common on Election Day: 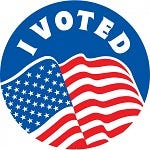 an “I Voted” sticker.

It seems hard to believe that a single piece of paper with adhesive can invoke so much passion in U.S. citizens, but that’s just what it does.

Dr. Richard Smolka, Professor Emeritus at The American University and founder of Election Administrative reports, chalks up this feeling of passion to the sense of civic duty Americans associate with voting.

He explains, “Voting is considered a civic duty even by some of those who do not vote. The census reports on voter turnout caution their numbers may be high because a significant number of non-voters say they voted rather than admit they neglected their duty. So my best answer is that some voters want to let the world know that they performed their duty.”

It is uncertain when the “I Voted” sticker originally made its appearance on Election Day. Some historians point to the 1980s and one company claims to have created the original stickers in 1986.

Today, however, the “I Voted” Sticker is not just about telling the world you completed your civic duty; many businesses encourage voting by offering giveaways to those wearing the sticker.

Regardless of your motivation, there is no denying the power of the "I Voted" Sticker. Maggie Ostrowski, a spokesperson for the Ohio Secretary of State’s office, notes that the stickers actually make the jobs of poll workers easier by encouraging citizens to vote. She explains, “Voters in Ohio definitely ask for them when they finish voting. They wear them as a badge of honor on Election Day that they exercised their right to vote and participated in our democracy. It’s a small gesture, but it means a lot to them to wear it proudly and see fellow citizens wearing them too.”