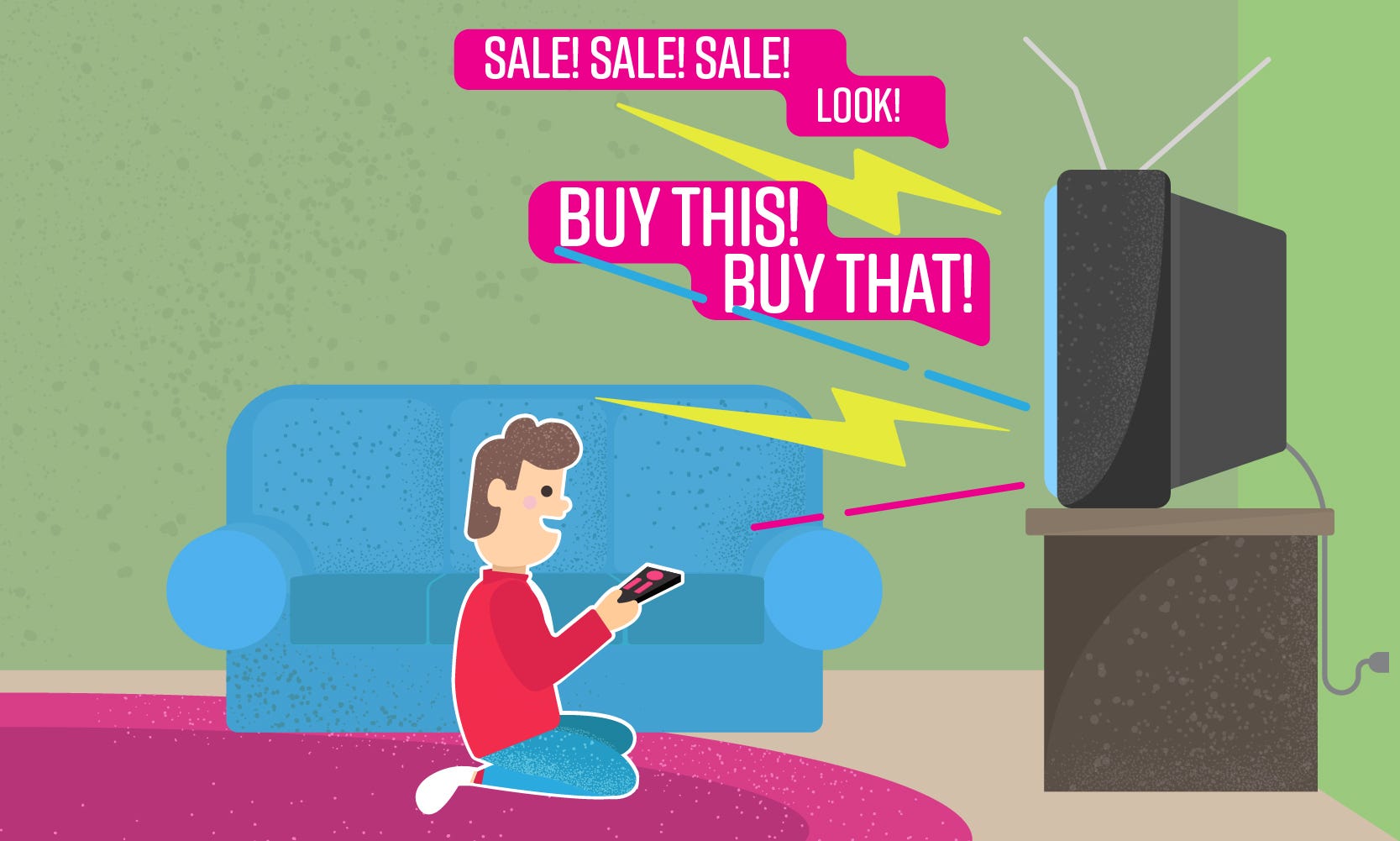 Looking to optimize your business and convert the widest range of potential customers? What a coincidence, that’s just what this article is about. Now, in order to accomplish reaching a wider audience, you’ll need a firm understanding of the modes of engagement and which mode is most important for growing your business.

The four main modes of engagement between a company and a consumer are:

Advertising Engagement: By The Numbers

Okay, so you know what an advertisement is. Since you were a wee lad or lass, your ears and eyes have been flooded with messages from companies. As a matter of fact, according to Magna reports America’s advertising spending reached an all time high in 2018. Magna, if you are aware is an investment, intelligence, and innovations firm for IPG Media Brands. IPG Media Brands, now, is an agency of “10,500 marketing communication, media and technology specialists in over 130 countries.”

After looking at print and digital, they found a total of $207 billion dollars was spent on advertising in the U.S. alone. To gather some perspective, consider that that’s just a stone’s throw from the GDP’s of some countries.

Now, companies would not be shelling out all this advertising money if they were not seeing a positive, discernible effect, right? The truth is though, most of us, aren’t head-over-heels-compelled to leap at every offer presented to us. No, we have our discerning, gravitating only to what speaks to us. So what makes some ad campaigns more successful than others? A look at advertising engagement may reveal the answer. First, though, let’s define it.

A History of Advertising Engagement

The Interactive Advertising Bureau, or IAB, defines ad engagement as “a spectrum of consumer advertising activities and experiences that will have a positive impact on a brand.” They define those experiences as cognitive, emotional, and physical. According to the IAB, this definition was arrived upon by taking into consideration cognitive, behavioral, and emotional factors. These metrics were measured, assuming they can be accurately quantified, via consumer survey.

Often the phrase “advertising engagement” is used to refer to the interactive applications made available to consumers via digital platforms. Let us not forget, though, that the phrase has deeper roots. If you want to get technical, the phrase comes from the 19th century. 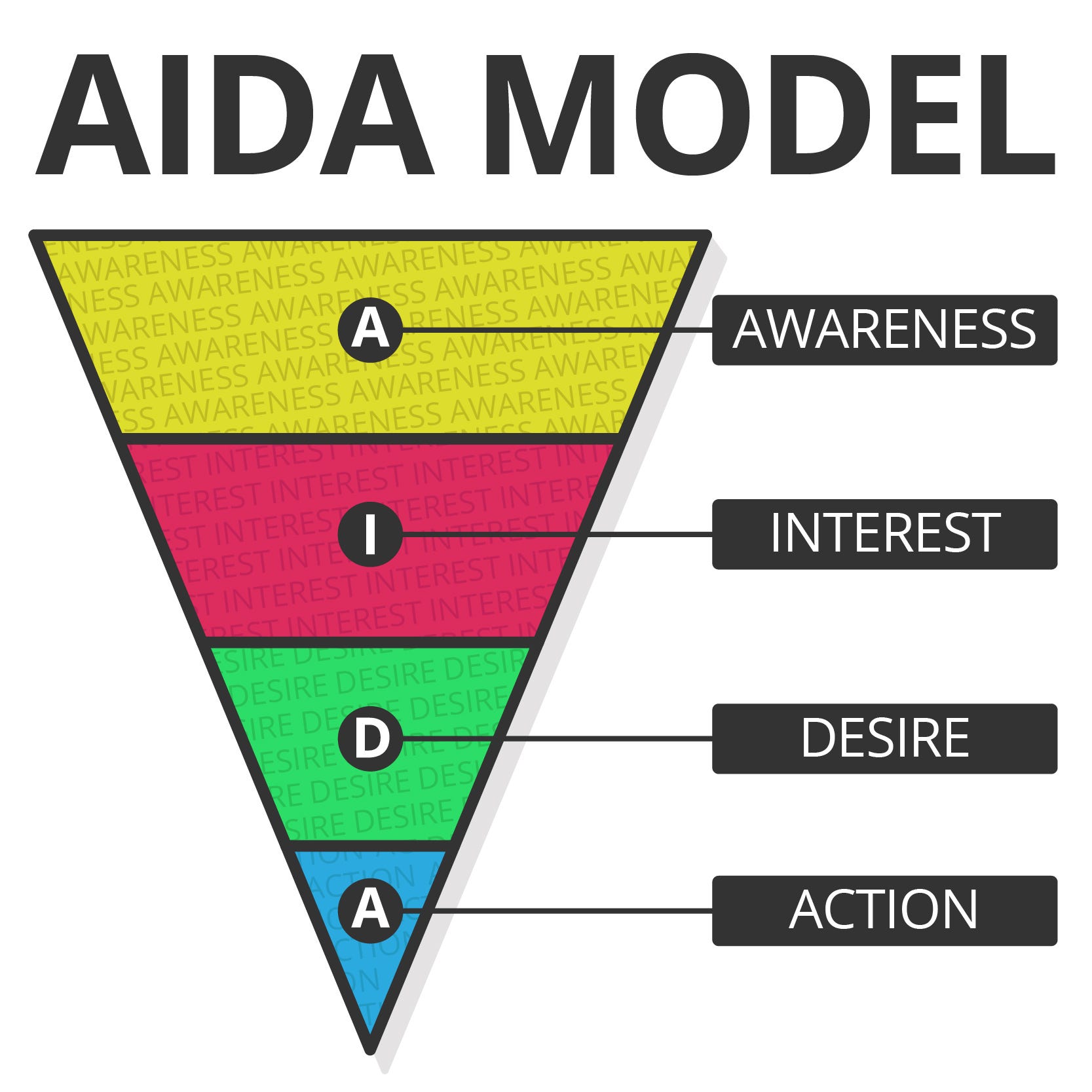 In 1898, marketing pioneer E. St. Elmo created a system that allowed sellers to chart and influence the customers’ likelihood of purchasing a product. His system AIDA stood for, and made its focus, the stages of (A)wareness, (I)nterest, (D)esire, and (A)ction. He argued that it was the seller’s responsibility to make the consumer aware of the product. Maintain the curious consumer’s interest in said product. Convince the customer that they need, or want, said product and finally influence the customer to act on this desire. In 1925, his step by step method was turned into one with a hierarchical structure.

The aforementioned hierarchical model of the AIDA became known as the AIDA funnel. It would go on to become a staple of the 20th century marketing industry. As time went on, other marketers would try their hand at covering for the blind spots of Elmo’s model. One critique of Elmo’s system was its failure to account for the emotional dimension of purchase making. As a result, several reboots were made. Like the following:

In the 1960’s sellers were granted another insightful, game-changing proposition. It came in the form of a book by Russell H. Coney, Defining Advertising Goals for Measured Advertising Results (DAGMAR). Coney made the assertion that marketing and advertising, while there to facilitate the same end goal, were two distinct elements of the sales process.

Marketing, he said, was based mostly on maximizing revenue. 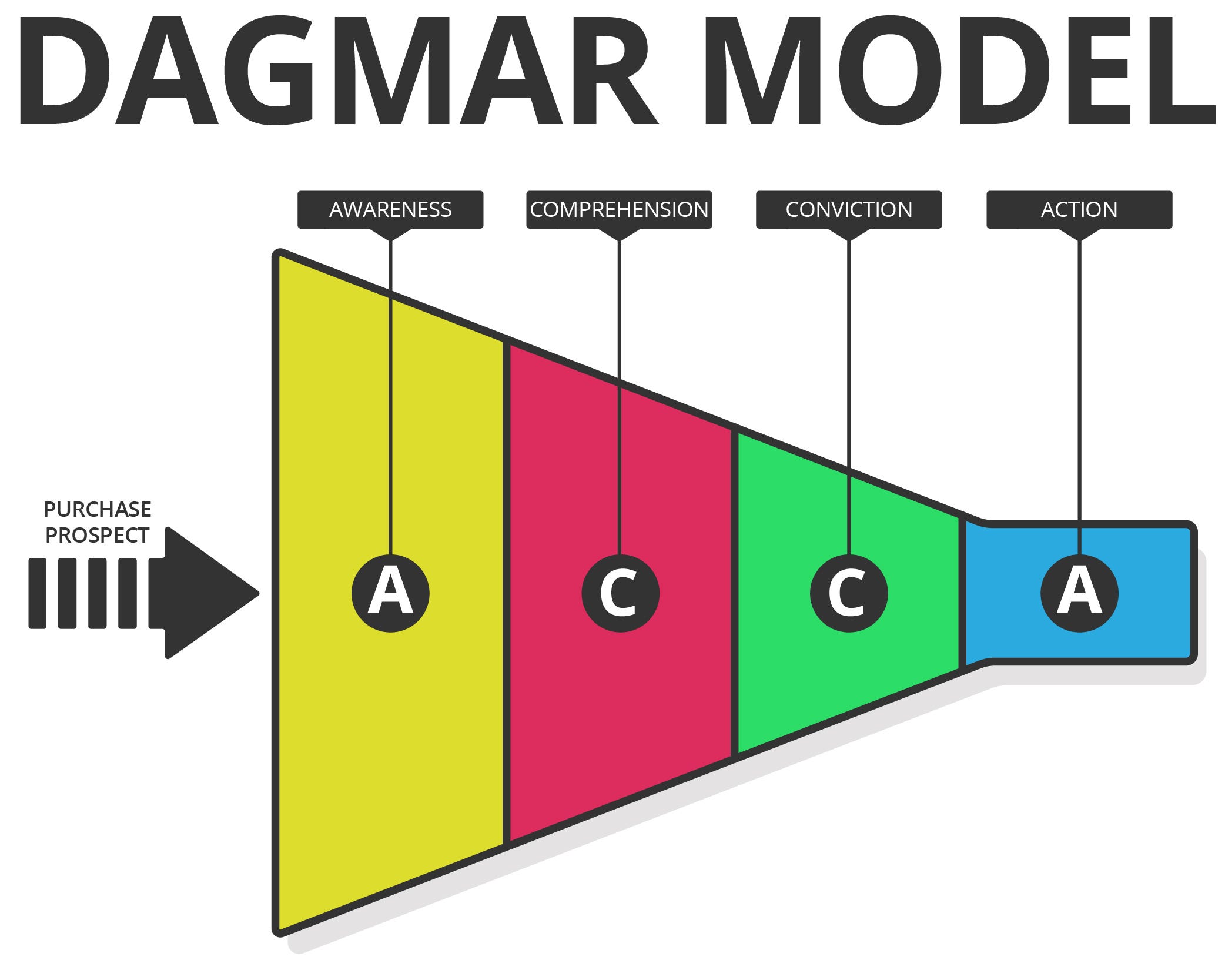 Advertising, then, was focused on making that revenue possible, by way of brand to consumer interactions. He devised his own advertising hierarchy for consumers. The DAGMAR model thrived on a process of raising awareness and the consumer base’s understanding of a product, and then working the group until you can identify those members most interested, i.e. your core demographic. Then turning that demographic into a customer base. This method was, at the time, revolutionary.

Fast forward to 2019, and the storied history and progressive developments of the advertising game are forgotten by many today. Revisionist history marks advertising engagement as a thing elusive to the advertising experts of the past. It is often regarded as a newage measure, one used to determine how invested consumers are in a company’s digital offerings. As you can see, though, advertisers have long been concerned with the cognitive and emotional aspects of purchase-making. You should be too, and here’s why.

Digital Vs. Print Advertising: Which Is Better For Engagement?

Digital display advertisements are literally everywhere. One may assume them to be most effective means spreading awareness of a product. It is this ubiquity, though, that may actually be leading to their ineffectiveness. In 2016, the firm Lumen conducted a study to see just how effective these campaigns were. A little backstory before we continue, so Lumen is an eye-tracking and advertising research agency. Their clients include Chanel, Unilever, Papa Johns, and the BBC, among others. Okay, I think that’s enough to make them sound legitimate. The experiment involved attaching specialized eye-tracking software to the laptops of 300 consumer participants.

“The best digital ads do get looked at – but they tend to be simple, elegant, beautiful ads that a creative department would be proud of, rather than moving direct mail pieces,” said Mike Follett, Lumen’s managing director. He suggested then that advertisers take a page from the book of print-based advertising. There are many ways to create successful print-based advertisements. One of which, is through the packaging itself.

According to Red Crow Marketing, the average American will see between 4,000 and 10,000 ads a day. How then, do you cut through all that noise? Easy, with printed ads. 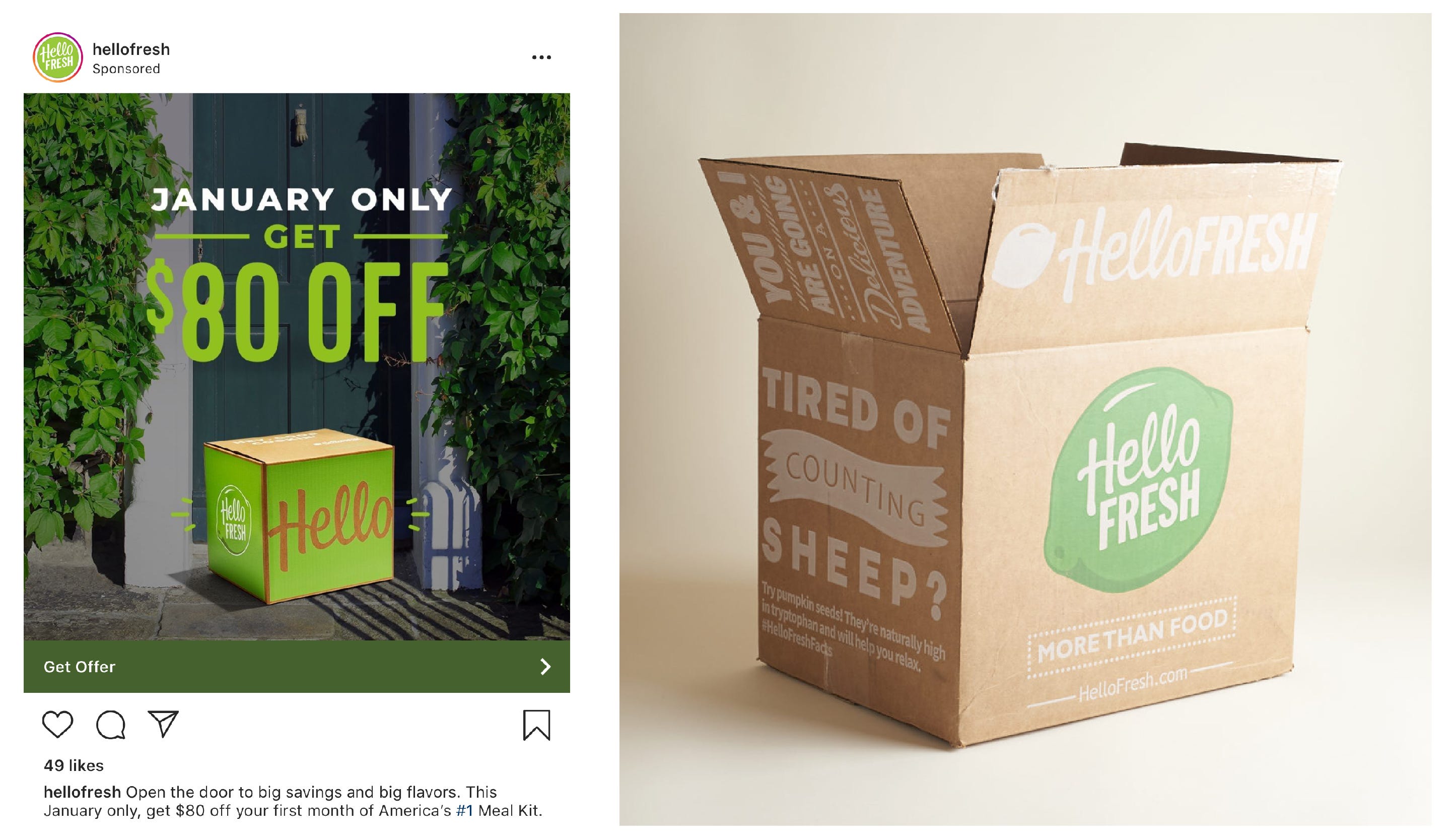 What many companies fail to realize is that a product’s advertising materials are supposed to work in conjunction with its printed packaging. After all, both the packaging and ads are representations of the actual physical product. Both work to convey information about that specific product.

For many, the packaging is the first thing they are acquainted, not the other ads or the product itself. Think of all those spur-of-the-moment pickups we make while moving through shopping aisles. Former Procter and Gamble CEO A.G. Lafley referred to the seconds before these pickups as the “moment of truth.”

Packaging as advertising is a method that works especially well for companies with smaller budgets. Why pay for TV, internet or radio ads, when the packaging can be more effective? That being said, let’s take a look at a few examples.

This packaging is bright, fun and eye-catching. Not only that, it conveys information about the product’s function and its primary demographic. 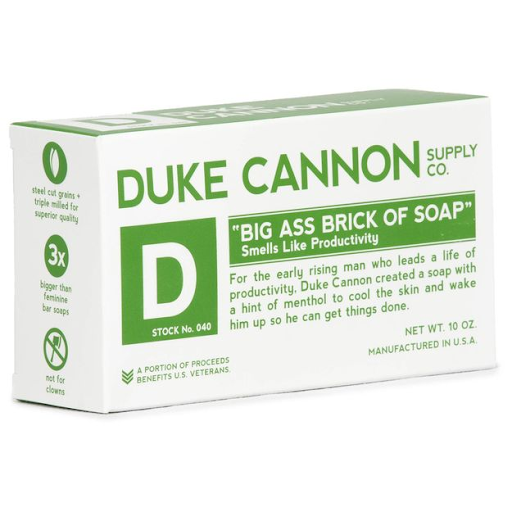 This packaging for Duke Cannon soap jumps out at you, but its purpose is twofold. See, not only does it elicit your attention, but it gets you interested enough to find out more about the product. Its industrial aesthetic also speaks to a purported demographic. 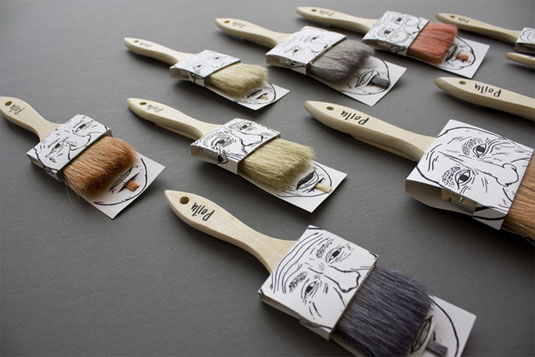 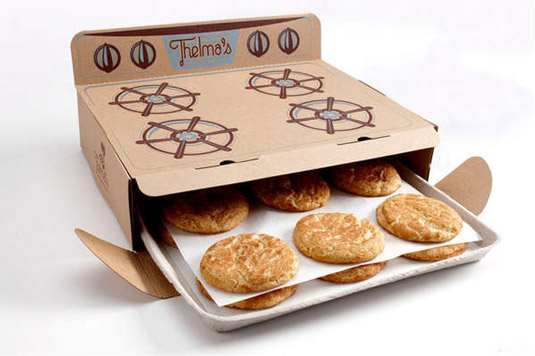 If you’re looking to improve your brand’s advertising engagement, then consider giving greater attention to its packaging and labeling. You can get started with a free custom label quote here. Or by dialing (800) 750-7764. LabelValue is open Monday through Friday.